What is Europe? The EU listens to Youth | Perspective 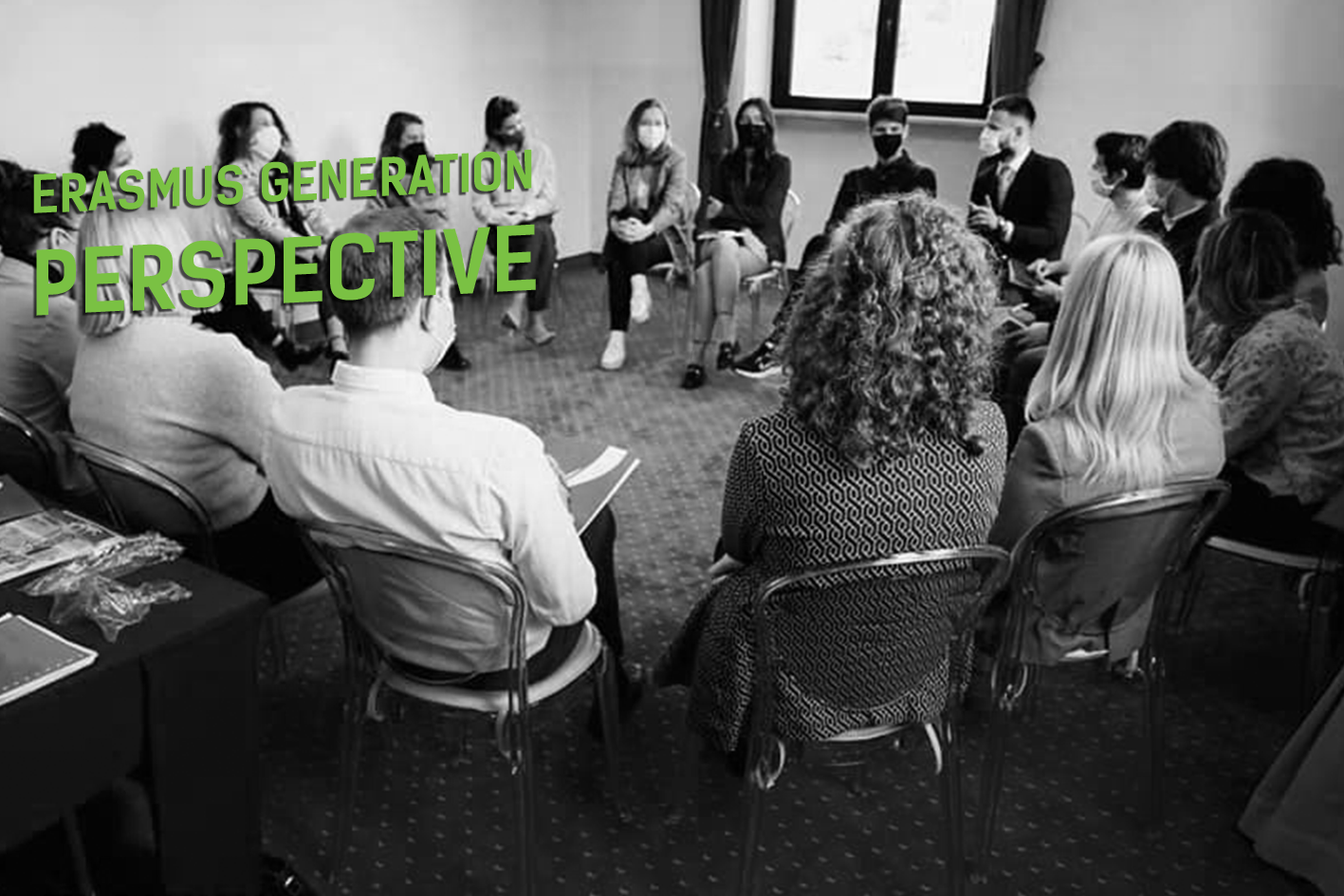 * Erasmus Generation Perspective articles are written by ESN volunteers to share the student voice on current policy developments in the field of international education. The text represents the authors' individual perspective and not an official statement of the Erasmus Student Network.

Many times, while planning a weekend runaway with friends, applying for the Erasmus programme or even using a digital signature when signing the documents with the university, students tend to not overthink the complicated mechanisms and agreements which make all of this possible and rather take these benefits for granted. Traveling, taking care of papers without leaving home, enjoying international internships and career opportunities have already become an unquestionable reality for many, however, not for everyone. The prolonged and stagnating process in the EU-Balkan relations is causing frustration among the youth of the Balkans, many times pushing prosperous students to seek the goals of their life abroad, leaving their home behind. 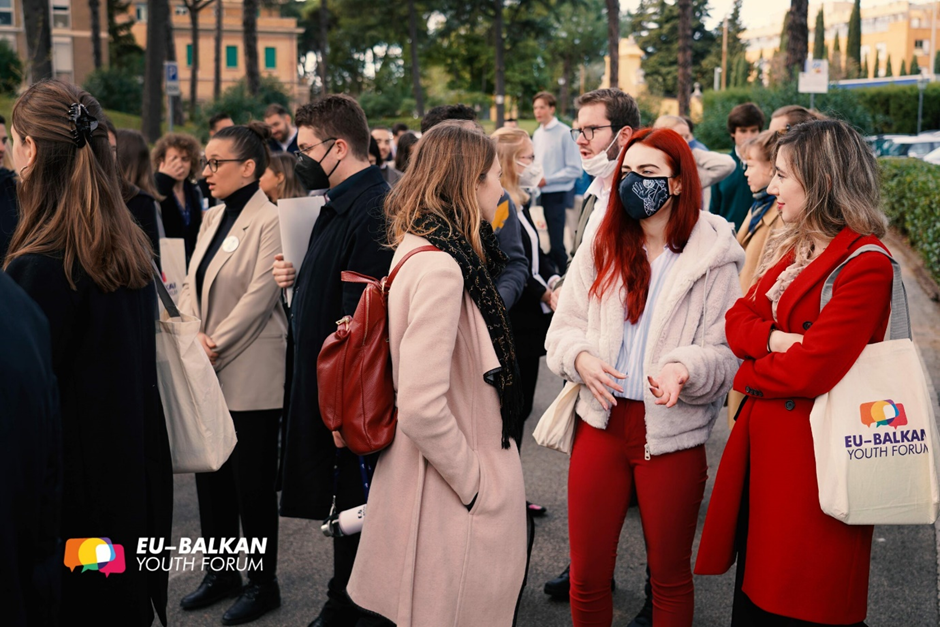 Between 22 and 26 November in Rome, the very first edition of the EU-Balkan Youth Forum (EUBYF) took place, encouraging young European citizens to express their ideas and concerns about the future of Europe. The event, organized with the initiative of Italy’s Ministry of Foreign Affairs and partners, hosted 88 participants and mentors from 33 countries. The forum was not limited to what Europe means today but focused on how the younger generation wants to see it in the future. As the discussions of participants became vocalized in the working groups as well as in other open discussions, it became clear that the definition limiting the EU to its 27 member states is outdated and no longer desired. For the young, the future EU should not stick to its old narratives, but rather focus on inclusion and growth. Having the goal of effective integration, strength and unity, the perception of Europe and EU separating 27 member states from Western Balkan 6 should be changed. Many participants have spoken up: “We want a future of the EU including all 33 states”. Such a position was openly supported by the organizers - the Italian Ministry of foreign affairs and its representatives, who have encouraged participants to promote the hashtag #EU33 when publishing the moments of the event on social media. 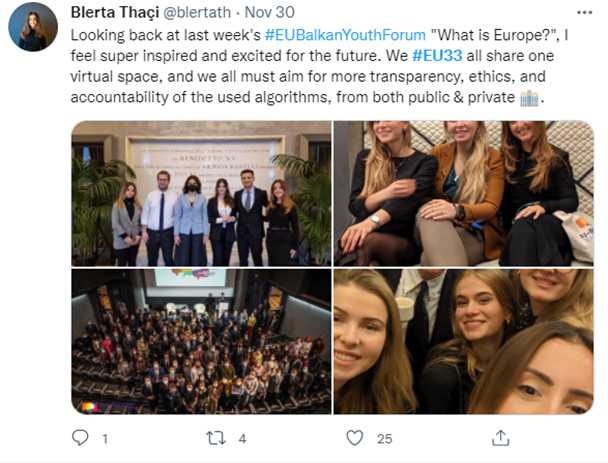 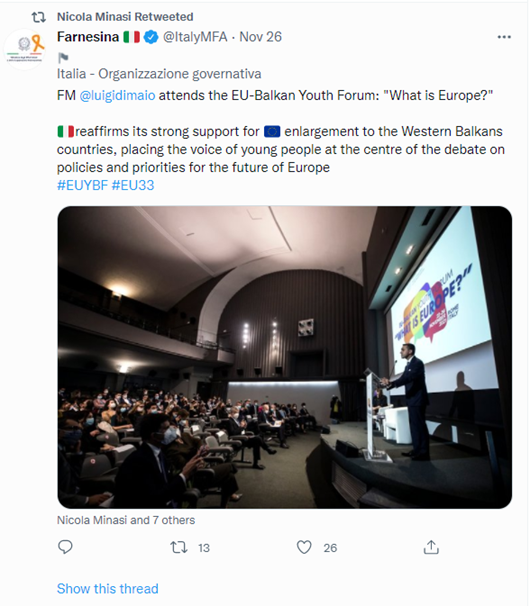 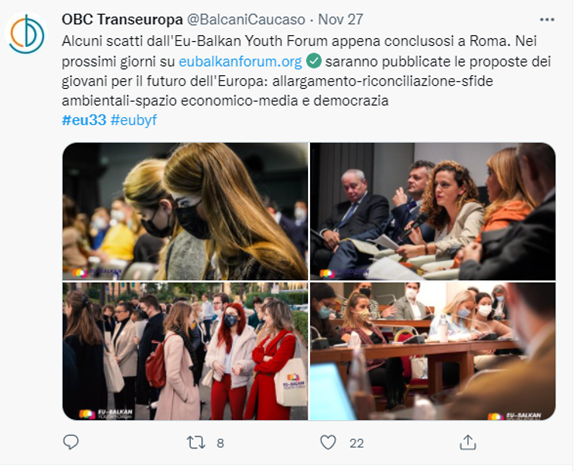 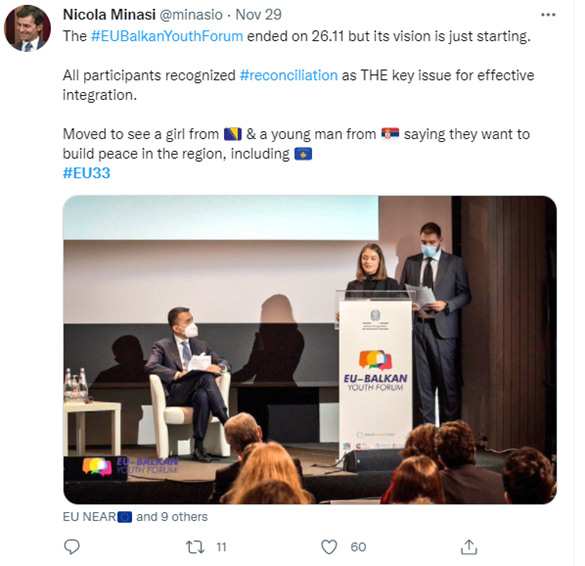 Young leaders from the Balkans and EU member states were working together in the working groups focusing on the five subtopics all connected to the central question “What is Europe?”. Working groups, coordinated by the professionals in the field, were focused on questions such as European enlargement, reconciliation in the Balkans, environment, economic integration and digital environment. Each group was formed according to applicants’ skills and preferences to prepare recommendations in regards. The final result – recommendation papers of each working group – at the end of the forum was presented to Italy’s Minister of Foreign Affairs Luigi di Maio and European Commission Vice President Dubravka Šuica. It was not only the final session that allowed participants to share their thoughts with the decision-makers. Each day the forum hosted panel sessions with special guests, followed by Q&A sessions, allowing free interaction and curious discussions. Adrienn Király, working with the European Commission, shared that the EU-Balkan Youth forum was a great opportunity for the European Commission to exchange knowledge and understand youth’s priorities on the European level and make sure that priorities and future vision of Europe match up. Secretary-General of the Regional Cooperation Council Majlinda Bregu in the interview after one of the panel sessions shared: “People are the same, we just get to know them. And Europe is what Europeans make of it.” The challenges for the youth are not that different regardless of the home country. Employment and entrance to the labor market, truth and peace, tackling climate change, digitalization, technological revolution and a safe digital environment are the topics that concern each of us thus encouraging us to collaborate while looking for the most effective solutions together. 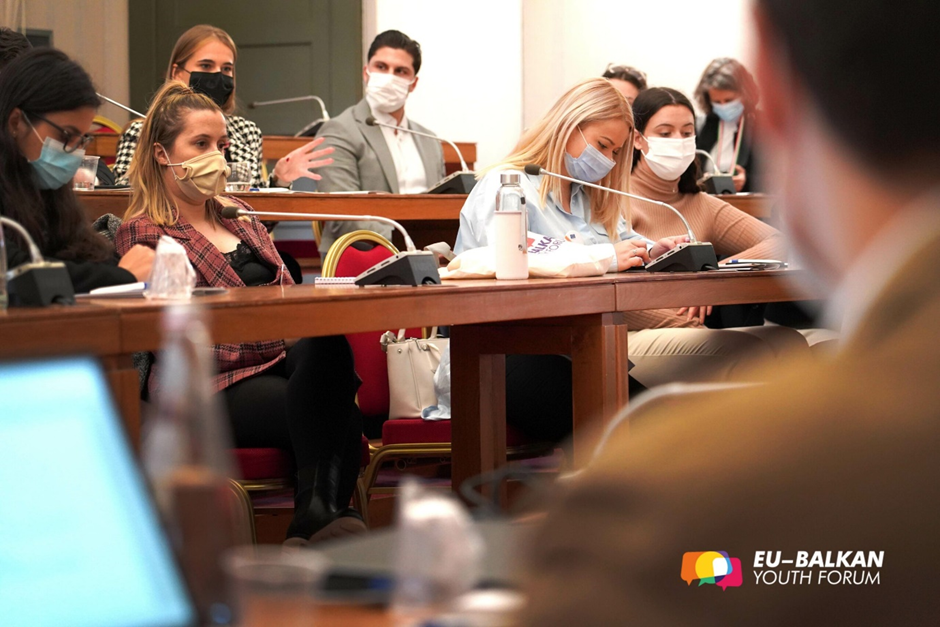 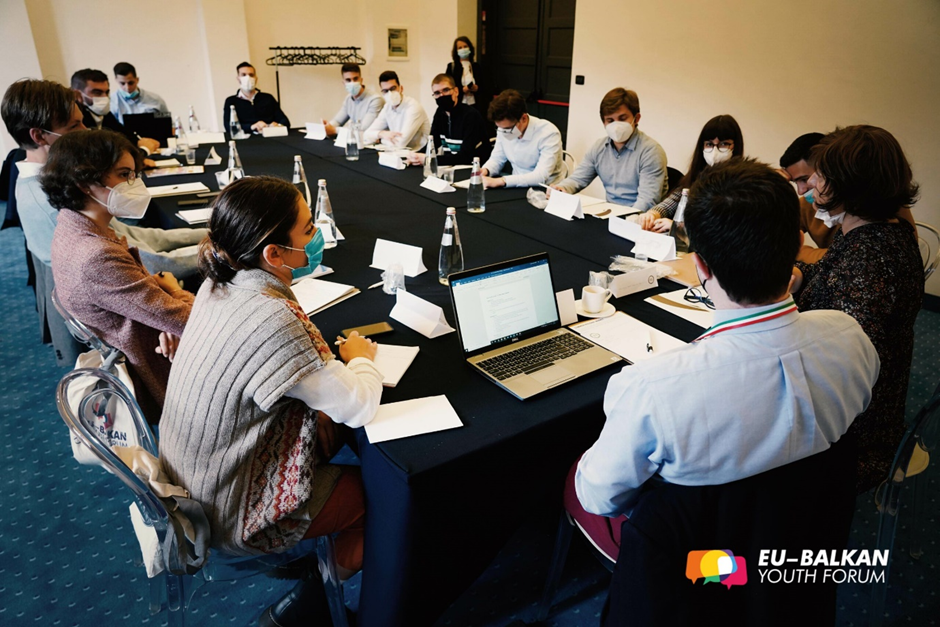 When having an opportunity to speak with the forum guests and organizers, student representatives from Western Balkans have also drawn attention to existing and growing challenges regarding EU-Balkan integration. Topics such as the currently stagnating process of visa-free travel, the need to keep the youth in the Balkans engaged and interested in EU affairs and initiatives and many more were being mentioned. The participants, regardless of the working group and specific focus area, have recognized the importance of closer cooperation between civil society and national governments. The bottom-up approach was highlighted as the desired one when working with challenges of the present times. The recommendations have also highlighted the urge to cooperate on environmental issues and promote economic partnership between the EU and the Balkans. The creation of a shared historic European narrative, the importance of reconciliation and the role of education while seeking these goals was also among the main thoughts expressed by the participants. The final recommendations were also particularly focused on the special need for digitalization to ensure democratic processes all over Europe. Implementing innovations, raising awareness about disinformation, fake news, working on increasing media and cyber literacy, were mentioned as the areas where the focus is urgently requested. As the media and other virtual spaces became an inseparable element of everyday life, it was recognized that the hostile narratives or the lack of awareness about the dangers online could harm every sphere that Europe is focused on. The ongoing discussions regarding EU image and integration in the Balkans provided participants with the unique knowledge which later on could be used in practice. 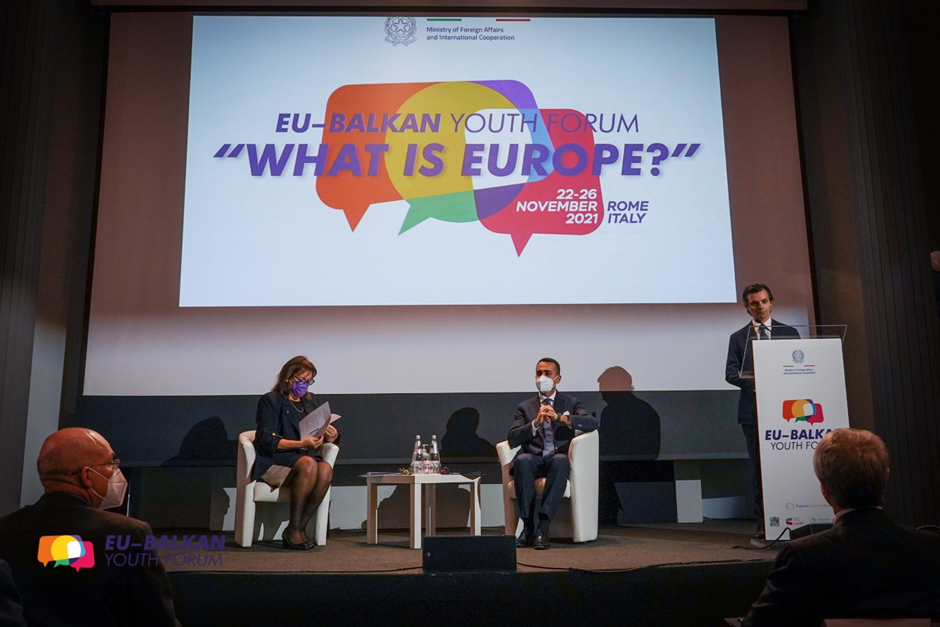 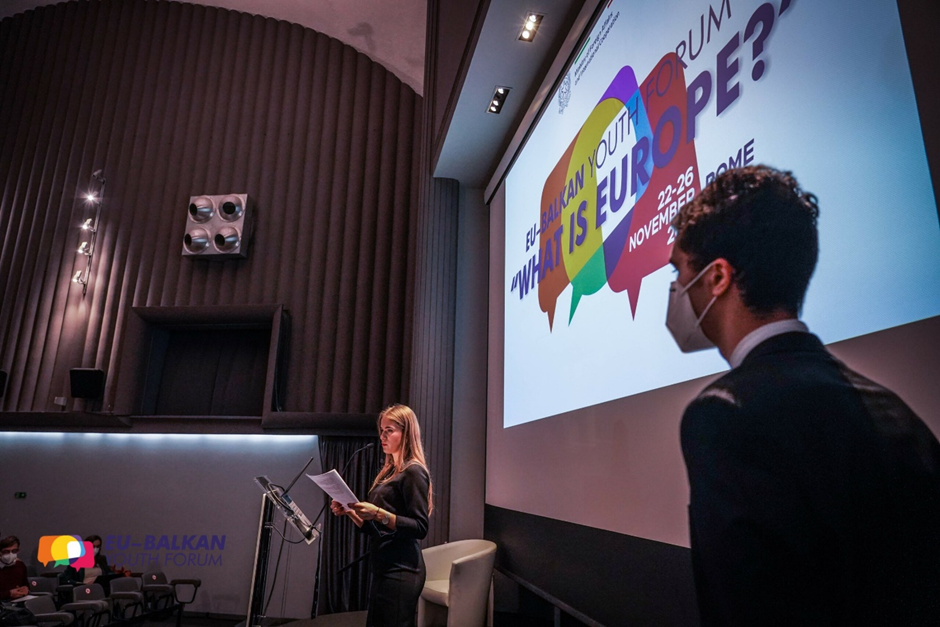 The main goal of the forum was to create a platform for young people both from the Balkans and EU member states to express each other's concerns about the current situation regarding EU enlargement and exchange knowledge while defining proposals for the future of Europe. The forum will also channel its conclusions and recommendations to the "Conference on the Future of Europe".  The event was not only a one-time experience. The idea behind was to provide students from EU member states and Western Balkans to bond and create networks that could lead to future collaboration and projects. Debating on Western Balkan future between youngsters from various cultural and national backgrounds allowed finding different and original approaches to the challenges of today. As Italian Diplomat Nicola Minasi stated, the goal of the EUBYF was to encourage collaboration between Balkan and EU member states' youth and stick together implementing projects which could generally contribute to EU-Balkan integration. 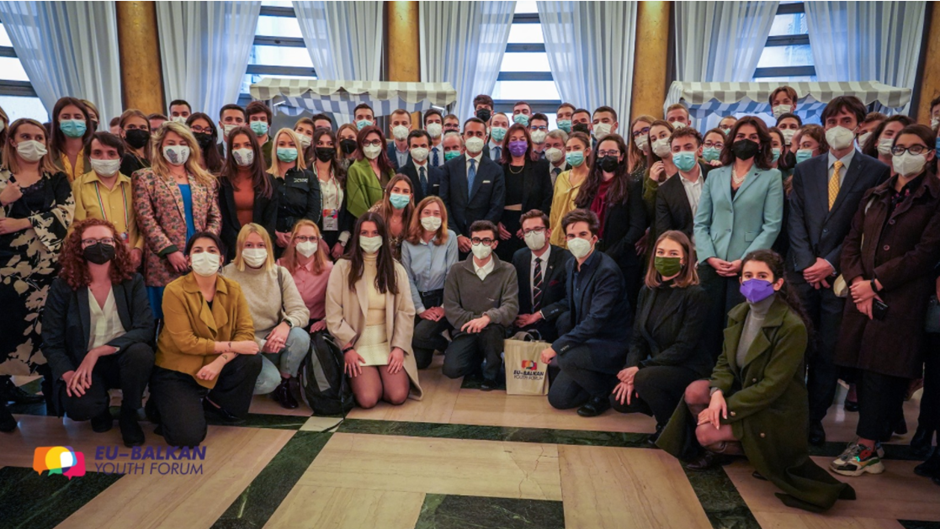 EUBYF once again revealed the role of education when speaking about Europe we want to live in and the Europeans we want to become in the future. Each working group has proposed recommendations that could hardly be implemented without the close collaboration of learning institutions and initiatives, including both private and public sectors. Learning necessary skills of different fields, exercising critical and creative thinking, working in a team and sharing the best practices is already an inseparable part and the main goal of education curriculums and projects. With the focus on future threats and challenges, education becomes an area where constant innovations and new approaches must be applied. Over time, the EU has implemented numerous initiatives in the Western Balkan region aiming to strengthen the voice and the skills of the youth. In the field of education, youth and sports, the Erasmus+ programme is the EU's key instrument for young people's personal, socio-educational and professional development. The Western Balkan countries (Region 1) can take part only in certain actions of the Programme, but two of them, Serbia and North Macedonia, being Erasmus+ Programme Countries, can fully participate in all actions of the new programme. Erasmus+ has opened many opportunities for students and academic staff mobility in the Western Balkans, thus enabling participants not only to raise their qualifications but feel what does being a European citizen mean. When participating in Erasmus mobility, participants not only learn about foreign cultures but are rather pushed to challenge their values and beliefs, moving towards more open and cooperation driven thinking.

Examples of such initiatives as the Erasmus mobility programme and recently discussed EUBYF serve as proof of successful cooperation and a source of inspiration for further projects. The only limit is the one that people set for themselves. With this note, let’s keep being open for future initiatives and the changes that the future might bring.